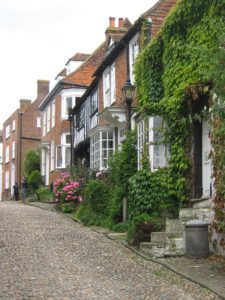 Rye is a picturesque English town in East Sussex, in the South of England.

Seemingly suspended in time the town displays a variety of interesting buildings and architectural styles. Medieval half-timbered houses line many of the narrow cobbled streets such as Mermaid Street pictured to the left.

Rye has it’s own unique character and is possibly a little quirky, exemplified by many of the names of the ancient buildings along this pretty street: such as ‘The House Opposite,’ or ‘The House with the Seat.’ The church of St. Mary the Virgin has a clock that has ‘Quarter Boys,’ so named because they strike the quarters, rather than the hours.

Rye is a popular tourist destination boasting a variety of historic sites and places of interest. Tudor and Georgian buildings may also be seen, and Lamb House, once the home of writer Henry James is a fine example of Georgian architecture. Now owned by the National Trust the house is run as a museum with many of James’s personal possessions on display. The house is open to the public and features a beautiful walled garden.

Rye has a strong literary tradition and has been home to many famous writers. As well as Henry James they include Joseph Conrad, H.G.Wells and E.F.Benson. Benson set his Mapp and Lucia series here.

Today the town sits on a hilltop looking out over the Romney marshes. It is a popular tourist destination with many historic sites and places of interest.

Rye probably dates back to Roman times. One of the towns oldest buildings is Ypres Tower, originally built in 1249 to defend against the French. 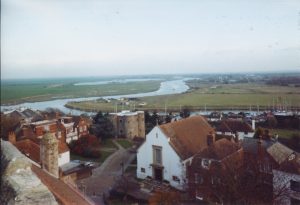 Rye was at one time surrounded by sea  and this fortified town once played an important role in the defence of the south coast of England. Like its neighbour Winchelsea it was one of the historic Cinque Ports. Prior to the formation of the Royal Navy these five towns provided ships for the King and protection of the realm.

The River Rother today meanders to the sea, but originally it took an easterly course through New Romney. Violent storms during the 13th century radically reshaped the area. Not only was the course of the river changed but Rye became cut off from the sea, and Old Winchelsea was destroyed.  In 1377 the town was sacked and burned by the French.

Whilst returning to England in 1726 King George I was run aground at Camber Sands. He spent the next four days at Lamb House as a guest of the then owner and builder of the property, James Lamb, a wealthy wine merchant and local politician.

Rye is a mere 8 miles and 20 minute drive from Fairlight along the A259, then left onto Sea Road passing Winchelsea Beach. Sea Road becomes Pett Level Road. Just before Battery Hill it is a left turn into Waites Lane and Fairlight Village.

The 101 bus follows the same route and is only slightly slower at 22 minutes.

Due to it’s close proximity most people prefer to have hypnotherapy consultations in person here at Oak Lodge, although if travel is a problem hypnotherapy is still possible using Skype.

For a list of issues I treat using hypnosis and hypnotherapy go here.