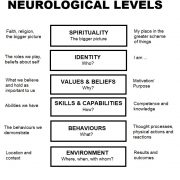 Based on the earlier work and thinking of Bertrand Russell and Gregory Bateson, Robert Dilts created the system model known as ‘Neurological Levels,’ sometimes abbreviated to Logical Levels.

This is a model that can be thought of in various ways and that has various uses.

It attempts to describe the different ways we experience and process that experience, and at the same time to assign a hierarchy.

The model proposes that the level below will affect the level above, but the higher up the hierarchy one travels then all levels below will be affected.

The Logical Levels define 6 levels of context or thinking:

Environment is about the place, or places in which we live, defined by the external conditions in which behaviours take place.

A person operating at this level will notice the place and the people around them. Different environments will have different meaning and significance to the individual. Some tribal markers will be recognised at this level.

When we decide to improve, develop or make changes the results will often be most identifiable on this level, through the behaviours we demonstrate.

Behaviour refers to the actions and reactions by an individual within a given environment.

A person operating at this level will be describing what they thought (mental behaviour) and did (physical behaviour), and also what effect those behaviours had. In a therapeutic context or coaching situation it also includes what they might have done, and what effect that would have had on the outcome.

Skills and Abilities is the level of capability or competence: what the individual is able to do in other words. Therefore this level might be considered the ‘how’ level.

Ability drives behaviour through personal strategies, which involve skills and their development. A person operating at this level, is talking and thinking about ‘how’ to achieve something, including the skills they might need to develop to do so.

Values are beliefs about what is important in a given situation or context. Beliefs and there importance have a significant impact on motivation. Values and Belief might therefore be thought of as the level of ‘why?’

This level is about the reasons behind the behaviour, including any underlying values. Beliefs and Values can either reinforce or undermine capabilities. For example, a belief that you are ‘not good at drawing’ could undermine any attempt to learn to draw well, and the motivation to do so.

Identity is about ‘who’ you are, and the sense of self.

Conversations on this level are often about who the individual thinks they are, and how they see themself. It will be recognised that the lower level of belief has a significant impact on this level I.e. “I believe I am a good/bad/lucky/unlucky/intelligent/stupid person” etc. It should also be noted that every individual tends to have a continuing inner narrative about who and why they are, and their place in the world.

Personal self-actualisation* may also take place largely on this level, especially if the individual has no strong religious or spiritua; beliefs. such as ‘What do I like?’, ‘What makes me tick?’, ‘What is my passion?’ A person suffering from stress and burnout often engages at this level.

Spirituality is not always included in the logical levels, and might be thought of as a step beyond the others. It is about something bigger, beyond the individual, and related to being part of a bigger system, whether that be family, community or beyond. For some people this level will be described by their faith or religion. Some people call this the ‘wisdom’ level, while others exclude it altogether, or link it to identity as part of how the individual see themself.

The Logical Levels model has many applications: one way to use it is as a model to help identify what promotes or hinders effectiveness.

There are occasions in coaching, therapy and personal development where there is a need to explore the issue and meaning of ‘Identity.’

It is important to remember that what we think influences what we do/how we behave, and ultimately the results we get.

*Self-actualisation – The realisation or fulfilment of one’s talents and potentialities, especially considered as a drive or need present in everyone.

Rapport is a term and an experience that seems to elude many people. Even the word may be unclear.

The dictionary definition of rapport is “a close and harmonious relationship in which the people or groups concerned understand each other’s feelings or ideas and communicate well.” Other words commonly used to describe rapport are – bond, empathy, harmony, sympathy and accord. People experiencing rapport will often report being ‘in tune’ or ‘on the same wavelength’ with the other person or persons.

Have you ever had the experience of meeting someone for the first time and finding that almost from the start you just seem to get on with each other really well? The more you talk the more things you find you have in common. You share similar likes and opinions. Perhaps you share common interests or enjoy the same foods. If you pay attention and look carefully you may even notice you dress similarly or have the same tastes. You always seem to be in tune with each other, and on the same wavelength.

You may have a best friend for whom all the above are true. Someone you have known for a long time and have always enjoyed their company because you both get on so well. There never, or rarely seems to be disagreement and you always seem to feel comfortable in each others company. There is, in fact, a strong bond between you that seems difficult to break. There may also be a level of empathy that seems on occasion to border on the telepathic.

That person may, in fact, be your partner or perhaps even your spouse. Although it does need to be said that many people in long term relationships have been unable to avoid the Complacency Trap.

The above descriptions may seem a little idealised to you, especially if you have never experienced feelings of being in rapport with someone. Also you may only have partially experienced some degree of what I have described above. Yet rapport, when felt, can be an amazing and powerful experience.

You may have experienced rapport completely as described above, or you may simply have been aware of some of the elements mentioned.

Why is Rapport Important?

The state of rapport is also referred to as one of the Four Pillars of NLP.

NLP philosophy believes that the ability to generate rapport with others is not only an essential skill for therapists, but is also an essential life skill to ensure a happy, harmonious and successful life. This is because relationships and interaction with others form a major part of most peoples day to day existence.

None of us live in a vacuum after all, and very few of us choose to live lives that are isolated from others. Those that do are often suffering from a lack of expertise or unhelpful beliefs about themselves, their place in the world and their own abilities. It has to be said that some people have innate people skills that make them good at naturally generating rapport with others, while the rest of us have to learn how to do it, and master the skill.

Rapport could be described as the lubricant that makes the wheels of social interaction turn more easily.

How to Achieve Rapport?

The real secret to rapport is commonality. Those things we have in common with the other person,  because we are always drawn to people with have things in common with.

When we meet someone for the first time we may recognise that they seem to come from a social group that is familiar to us. We know this by the way they present themselves, by their choice of clothing, the way they speak, or indeed the places where we encounter them.

Robert Dilts’ Neurological Levels is a good way to consider the differing levels on which rapport may be achieved:

Although still significant the lowest and least important level on the scale is Environment.

Environment is the place or places we encounter the other person. For example if you play tennis or golf, you will meet fellow tennis players or golfers (people who share an interest in the same sport you do) on the court, on the green, or at the club.

You may share your work environment with co-workers and have a job in common with other people at your office etc.

Parents may encounter other parents at their children’s school, or at PTA meetings etc.

The next level up is Behaviour.

People who frequent a particular environment will have a tendency to behave similarly in that environment.

It does not take a great stretch of the imagination to understand that people in the golfing environment probably behave similarly in that environment, and a common interest such as a sport can generate lifelong friendships after all.

People who work in the same environment may have similar behaviours because of the focus of the business they are associated with – Bankers carry out banking related behaviours. Lawyers are involved with the law. Sales people sell etc.

Naturally behaviours are generated or restricted by Abilities.

Behaviour is limited by what we can do, and we can only do what we are capable of.

Those people who are able to play golf or tennis probably will. Yet there may be other people who go to the club who are cannot play, but who are still interested in the game or the social side.

Clubs, trade associations and businesses are all people by persons with abilities in common.

The next successive level is Values and Beliefs.

Almost everything we do in life is governed by our beliefs.

For instance you may meet a person at the tennis club with whom you get on very well, but with whom  you never develop a close relationship or friendship because their religious, or political beliefs clash with yours.

Also our values and beliefs tend to underpin our most significant concept of self: or what we refer to as our Identity.

Identity, or who we think we are is key, and if we are able to quickly recognise someone who we relate to as being like us i.e. having a similar identity on all of the levels below, particularly on the level of Values and Beliefs, then we are likely to form an immediate and strong rapport with that person.

So the key to generating rapport with someone is to match them on as many, if not all of the levels listed here. If you are recognised as someone like the person you are communicating with, then they will tend to like you and rapport is assured.