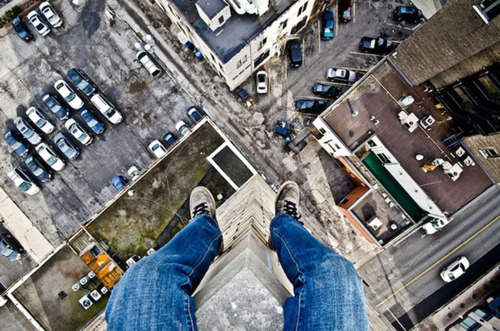 Fear of heights is Britain’s biggest fear according to the most recent survey conducted by YouGov.

Nearly 25% of people in the UK are reportedly ‘very afraid’ of being up high.

Most people incorrectly call this phobia ‘vertigo’, but the actual medical term for it is acrophobia.

People with this fear usually don’t like being off the ground at all, so anything from a wall to a tall building could bring on an anxiety attack.

Hypnotherapy is a fast and effective cure.

Acrophobia and altophobia are both terms used to describe fear of heights.

Most people have a degree of natural fear when exposed to heights, especially when there is little or no protection such as a barrier or hand rail. However acrophobia sufferers can experience a panic attack in high places and may become too agitated to return to a place of safety. There seem to be twice as many women affected as men. Those people who are confident in such situations may be said to have a ‘head for heights.’.

Vertigo is often incorrectly used to refer to acrophobia and is a symptom rather than a condition. It is commonly caused by a problem with the balance mechanisms in the inner ear where spinning sensations are experienced by the sufferer. This common misunderstanding of terms if probably due to Alfred Hitchcock’s film ‘Vertigo.’ There is however a correlation between lack of balance and fear of heights because fear of heights does seem to increase as we get older and our sense of balance diminishes. Older people become more fearful of losing there balance and falling as well as an increased fear of heights.

Relief from phobias typically only takes a few hours work with the right kind of treatment. I use hypnotherapy and NPL to reduce the fear and other symptoms to a normal level.

If you have an immobilising or overwhelming fear of heights hypnotherapy could be the answer.