Lewes is the county town of East Sussex, in the South East of England.

It is a market town with a population of around 17,000 people. The local landmarks and attractions include Lewes Castle, a 15th century bookshop, the annual Lewes Bonfire and opera nearby at Glyndebourne.

The town is built on the river Ouse amidst the beautiful South Downs. Country walks across the Downs in this picturesque part of the country are a popular recreation for residents and visitors alike.

There is evidence of a Roman settlement here.

The Saxons built a castle as a defensive point on the river, and it was they who gave the town it’s name.

The castle was later built upon and developed by William de Warrenne. De Warrenne, the 1st Earl of Surrey was awarded the Rape of Lewes by William the Conqueror after the Norman Invasion. 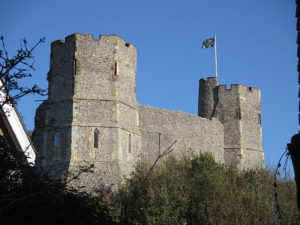 The town was the site of the Battle of Lewes, fought between the forces of Henry V and Simon de Montfort in 1264.

Lewes was also the place of execution for seventeen Protestant martyrs during the Marian Persecutions 1555-1557. They were burned at the stake in front of the Star Inn, now the Town Hall.

In 1836 an avalanche occurred, the worst recorded in Britain. It was caused by a large build up of snow on the nearby cliff which slipped onto a row of cottages. Fifteen people were buried and eight people died. The Snowdrop, a pub in South Street, was named in memory of the event.

Lewes was an active port for many years and developed brewing, iron and ship building industries. 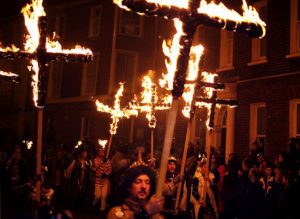 The Fifth of November is enthusiastically celebrated every year here. It not only marks the date of the uncovering of the Gunpowder Plot in 1605, but also commemorates the burning of the Protestant martyrs previously mentioned. As a result the celebrations also involve the burning of an effigy of Pope Paul V who was Pope at the time.

There are seven different societies putting on separate parades and firework displays during the evening. This can involve as many as 3,000 people, with an average of 80,000 spectators  attending each year.

The Lewes Bonfire is the largest and most famous bonfire night celebrations in the country.

Directions from Lewes to Fairlight

Hypnotherapy clients who choose to see me in person will find the quickest route to Fairlight via Hastings is along the A27 out of Lewes, then onto the A259. This route takes about an hour by car.

Trains from Lewes to Hastings also take about one hour. A 101 bus may then be taken between Hastings station and Fairlight, although if preferred the 101 bus may be taken for the whole of the journey between Lewes and Fairlight, taking between 1 hour 17 minutes and 1 hour 40 minutes. The 101 bus runs once every hour.

I choose to specialise in hypnotherapy because hypnosis is not only effective but a pleasant experience as well.

I worked with an equal number of hypnotherapy clients using Skype as I do in person.

Some people express concerns about online hypnotherapy but it is completely safe. Click for more information – Hypnotherapy In Person or Online

I offer hypnotherapy, counselling, coaching and other services covered here – Link to Services.

Hypnotherapy is effective for issues listed here – Link to Issues.

Hypnotherapy can help children as well as adults. I use hypnotherapy for children from 8 years and older.

If you would like more information about hypnotherapy, or to book an appointment, please contact me now.