THE FOUR PILLARS OF NLP 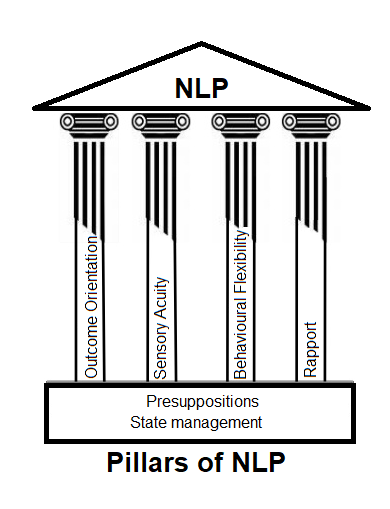 Neuro Linguistic Programming,otherwise known as NLP, was developed in the 1970’s by a group of people led by Richard Bandler, then a mathematics student at Santa Cruz University, California, and John Grinder a professor of linguistics at the same university.

Bandler had an interest in psychotherapy and ran a gestalt therapy group, and he and Grinder together created and facilitated what they called a ‘therapist training group.’

The focus of the group was to use language as a medium for change Various models were developed resulting in the methodology, philosophy and collection of techniques now known as Neuro Linguistic Programming.

A notable collaborator and role model was Milton Erickson, a prominent psychiatrist and exponent of hypnosis as a therapeutic tool. Erickson is often described as the father of modern hypnotherapy.

NLP incorporates models, theories and techniques from many different disciplines, however to my mind it is more effective than any of the other approaches it draws upon.

This is exemplified in one of the labels used to describe NLP – “The Pursuit of Excellence.”

Apart from incorporating ideas and strategies from several therapeutic models such a gestalt and hypnosis, NLP also draws on psychology, linguistics, mathematics, anthropology, cognitive theory and verbal and non-verbal means of communication.

NLP is often described as having four pillars that underwrite it’s many and varied techniques..
They are –

NLP is an outcome orientated discipline. That means whatever we do we must have a clear objective or goal. In order to achieve a successful outcome one must first define the outcome and be clear on what it is. Although this might sound obvious consider the number of people who have vague and ill defined New Year’s Resolutions which they continue to fail at each year!

Outcome orientation is also about setting direction. A positive direction rather than a negative one. NLP acknowledges that negatively stated outcomes are ill formed and more likely to get you more of the thing you don’t want. For example it is harder to give up smoking when your intention is to “Not smoke cigarettes.” This outcome focuses you on smoking cigarettes so the chances are you will smoke more. It is a much better outcome to aim for good health, or to save more money and to give up cigarettes as bye product of the

Sensory acuity is about using the senses and being aware of what is going on both in yourself and the environment around you.
It is important to be aware of what is working and what is not.

People often continue doing the same things in their lives without paying attention to what works and what does not.
When you are working towards your outcome you need to also develop a level of awareness that allows you to distinguish between what is working (and therefore moving you closer to achieving your outcome) and what is not.

In the science of Cybernetics there is a law that says that “in any system, the part with the greatest range of freedom will be the one controlling the system.”

Being able to generate lots of ways of doing things (flexibility) makes you more likely to succeed, because if what you are doing currently is not working you can simply choose to do something else.

The dictionary defines rapport as “a close and harmonious relationship in which the people or groups concerned understand each other’s feelings or ideas and communicate well.”

Rapport is an unconscious empathic relationship to another person.

Most people in the world live in a society that involves other people so the ability to generate rapport is a ‘must have’ skill.